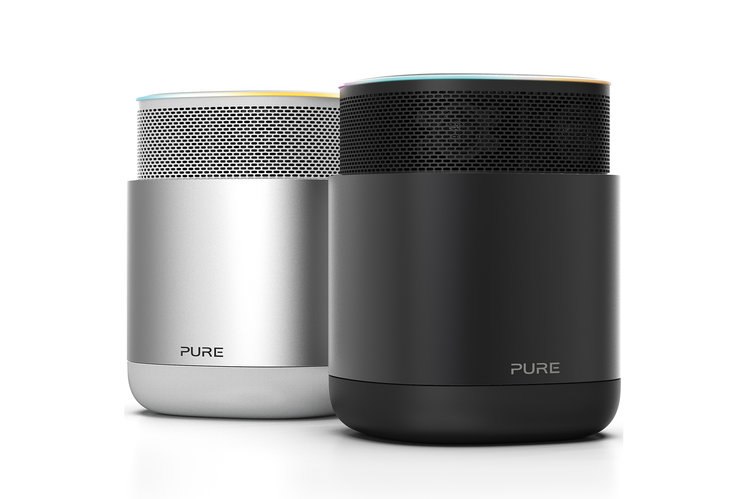 A lot of smart speakers could pass for normal wireless speakers with mics jammed in, but the Pure DiscovR is a little different.

It’s a smart speaker with Amazon Alexa that has a pop-up top. Push it in and the mics used to communicate with Alexa physically disconnect.

She won’t pipe up randomly as you shout at your pug Alex, telling him to stop farting.

The Pure DiscovR also has “Quick Corners”, shortcuts on the top panel you can set to represent any voice command, any playlist or radio station. This is a pretty neat feature we’d like to test drive for ourselves.

There are also, as in most of Pure’s other speakers, controls for music playback. And one to mute the mic. They aren't buttons, though, but capacitive touch panels.

Unlike an Amazon Echo, the DiscovR is battery-powered. It lasts up to 15 hours, and the whole portability factor gives the compressible top another reason to exist.

As well as Wi-Fi for that all-important Alexa connection, the DiscovR has Bluetooth, Spotify Connect, AirPlay 2 support and a 3.5mm aux in.

The Pure DiscovR is a seriously flexible speaker. But how will it sound?

It has a 3-inch bass driver and a pair of 30mm treble drivers. We’ll be surprised if it sounds as good as the Sonos One. But we’re more than ready to be surprised by the Pure DiscovR.

It's already much more useful for outdoors use, and with the top compressed is roughly a 110mm cube: cute, right?