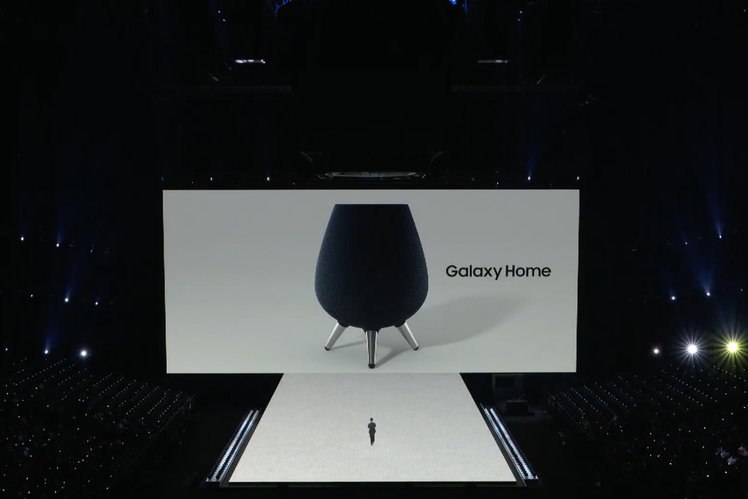 Samsung announced its first entry into the smart speaker arena, with the introduction of Galaxy Home.

This Bixby-powered device is meant to compete with Google Home, Amazon Echo, and Apple HomePod. It houses Samsung's own virtual assistant, doubles as a smart home hub, and can be used to pump out your favourite tunes. Unfortunately, Samsung was light on details when unveiling the speaker at its Galaxy Note 9 event, but if you still want to learn everything you can about it, you've come to the right place. There's no escaping the fact that Galaxy Home looks like a Google Home or Apple HomePod, but with legs. It has a texturised fabric cover in black and three silver spikes coming out the bottom. But it's supposedly on the heavier side, so it shouldn't tip over too easily. You'll notice it has rubberised buttons, indicator lights in the form of a subtle grey ring at the top (not unlike Echo), and even the AKG logo glows.

That's right. This is powered by Harman's AKG audio. While on stage, Samsung said it will "make music sound amazing". But it's not a speaker you can lug around with you while on the go, as it’s tethered by a power cable. There are no exact dimensions available yet, or details about its materials. We got the feeling Samsung isn't ready to fully show off this thing, as the unit it "demoed" was more or less a dummy. Galaxy Home is designed to deliver surround sound-level audio. It features six built-in speakers and a subwoofer. It also has eight far-field microphones for detecting voice input. Apart from that, there just isn't a lot of information available. Samsung did confirm, however, that Galaxy Home will double as a Samsung SmartThings hub for smart home control. That will see it rival other smart speaker devices that have found a niche in controlling the wide range of smart home devices out there.

The Amazon Echo and Google Home both offer control over a wide range of different platforms (including SmartThings), meaning voice control for lights, heating, cameras and a whole lot more. The flat top has control buttons on it for skipping tracks and changing the volume. And there's no aux input. But, like most smart speakers, you can start listening to music on your phone and easily send it over to the Galaxy Home. You can also control music with Bixby. Samsung spent a lot of time talking about Bixby, which isn't as well received as, say, Google Assistant, but Samsung still wants to make it a thing. Amazon Echo has Amazon Music. Apple has Apple Music. And Google has YouTube Music. But Samsung is going to ride on Spotify. It has a long-term partnership with the company, and plans to add Spotify to not only Galaxy Home but also many of its other products, even fridges.

We suspect that Samsung will support a wide range of music services – even if Spotify is the default – otherwise it won't be competitive against its rivals. Samsung isn’t ready to launch the speaker yet. It said we'd learn more more at a developer conference it has scheduled for early November, but we still don't appear to be any closer to launch.

We suspect that Samsung is going to target CES 2019 for the announcement of its availability, perhaps alongside that smaller model. Again, this isn't yet known. For comparison, the Apple HomePod costs $349 in the US, while Google Home Max costs $399. Amazon, meanwhile, charges just $150 for its souped-up Amazon Echo Plus.

If we had to guess, Samsung will launch this speaker in the $350 range.