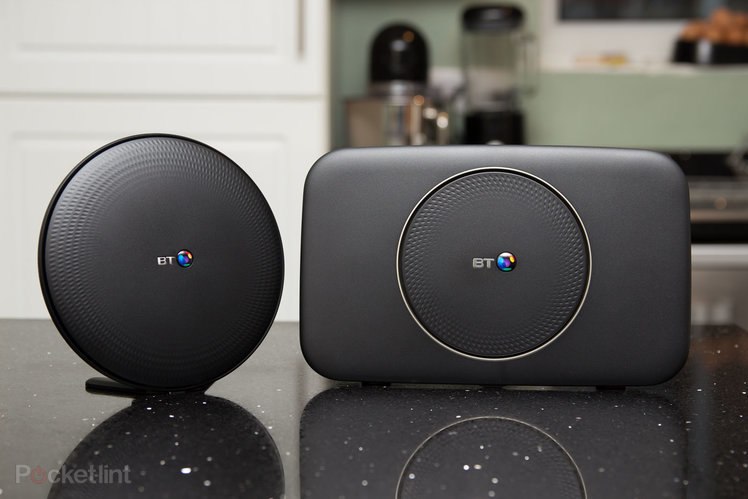 With broadband speeds generally increasing throughout the UK, the biggest battleground in for internet service providers is now Wi-Fi – the end point.

With connected devices increasing exponentially, it's often the Wi-Fi router that's carrying the load – and the weight of customer expectation – and BT is tackling that head on with a new hardware system and a new package called BT Complete W-Fi.

BT has a new Hub – the BT Smart Hub 2 – which it claims is the most powerful Wi-Fi hub of all the big broadband providers. While the size and premise remains much the same as the previous Smart Hub, the move to a rounded detail in the centre of this hub gives a strong hint as to what it wants to do.

That rounded central design matches the accompanying Wi-Fi Disc, which comes with the Smart Hub to form the basis of the new BT Complete Wi-Fi package.

The Wi-Fi Disc is designed to provide Wi-Fi access in an area of the house that would otherwise pose a problem – like an attic room or basement. It's the same basic idea as BT Whole Home Wi-Fi, Google Wifi or Netgear Orbi, but instead of being a separate secondary system to your router, it's all integrated.

How does BT Complete Wi-Fi work?

BT Complete Wi-Fi comes with the Smart Hub 2 and one Wi-Fi Disc, the idea being that if there's a Wi-Fi blackspot in your house, the Disc can be installed to ensure that you have house-wide access.

On most systems (including BT's existing Whole Home Wi-Fi), you create a secondary Wi-Fi network of extenders all with the same Wi-Fi ID, so you can seamlessly connect to whichever is in range.

In the BT Complete Wi-Fi system the router is part of the system, with the extenders talking to the Smart Hub 2 wirelessly, rather than needing an Ethernet connection. That means your first Disc can be where you need it, rather than next to your router which is often the case with secondary systems.

BT says that this setup of Hub and one Disc should cover most homes – and is backing up this claim by offering two more free Wi-Fi Discs if you still can't access your Wi-Fi throughout the house. Beyond that, if the BT Complete Wi-Fi fails to cover your home, you'll get a £20 refund.

We've been living with the Smart Hub 2 and Wi-Fi Disc for a couple of weeks. As a direct replacement for the Smart Hub, the new model is noticeably more powerful. We removed all other extenders and just used the Hub 2 and found that it reached well down the garden and through three stories of our home – which previously needed Whole Home Wi-Fi to achieve the same results.

The Chromecast in the loft room worked seamlessly – something that it sometimes struggled with previously – and the outdoor office reported a signal, where previously it lost a few bars and didn't have a reliable connection.

Heading down to the end of the garden and things start to drop off. The new My BT app now also contains various things to control your Wi-Fi, including testing the Wi-Fi speed. You might prefer another app (and there are plenty you can try), but once you hit an area with weaker Wi-Fi, it will suggest placing a Wi-Fi Disc to boost Wi-Fi in that area.

What you can't do is find a dead spot and place a Disc in it – because the Disc needs a good strong signal to the Hub so that it can extend the network, so really you're working with overlapping fields.

Adding a new Wi-Fi Disc takes place through the new My BT app – so all your Wi-Fi setup and control is through one app. The app guides you through the process, prompting you to use WPS on the Disc to make the connection.

If the WPS connection fails, you can connect via Ethernet cable so the two parts can talk, before then replacing the Disc where it needs to be.

One of the nice things about the new My BT app for Complete Wi-Fi is that it will show you what's connected to each access point. That's revealing, because if your Chromecast is playing up and saying it's not connected, you can check and see that it is – so it's likely to be the Chromecast at fault, not your Wi-Fi.

You can also remotely restart your hub, which can be useful if anything goes wrong. This might provide an advantage over Whole Home Wi-Fi, where previously if the link disc in the chain crashed, it could knock out your Wi-Fi and would take a while for you to discover.

How much does BT Complete Wi-Fi cost?

BT Complete Wi-Fi is available to BT Plus customers only, for an additional £5 a month. BT Plus is the system that merges 4G and fibre, offering you a 4G hub if you suffer a broadband outage so that you can remain connected.

Prices for the BT Plus package will depend on lots of variables, but if you're an existing BT customer interested in BT Complete Wi-Fi, then it's worth looking into. If you're not a BT Plus customer, then you can't just upgrade: the Complete Wi-Fi package is only available to Plus customers.

BT also tells us that the Smart Hub 2 is exclusive to Complete Wi-Fi customers.

BT Whole Home Wi-Fi is a standalone hardware solution. Although the technology is very much the same, with Whole Home Wi-Fi you have to pay for the kit and setup a new Wi-Fi network. That means you can use it with any router and any ISP, but you will have to pay out about £100-150 to get the hardware.

BT Complete Wi-Fi comes with all the kit you need – so it's only the £5 a month extra you have to consider (on top of the BT Plus package costs). Obviously, after 2 years it's starting to cost you more than if you'd forked out for the hardware – but you might not really feel that £5 a month anyway.

If you already have BT Whole Home Wi-Fi, in reality, there's little incentive to change as the final experience is pretty much the same. We've lived with both systems – what BT Complete Wi-Fi really provides is access to an extended system without the big payout for hardware.

BT Complete Wi-Fi is available for BT Plus customers now.