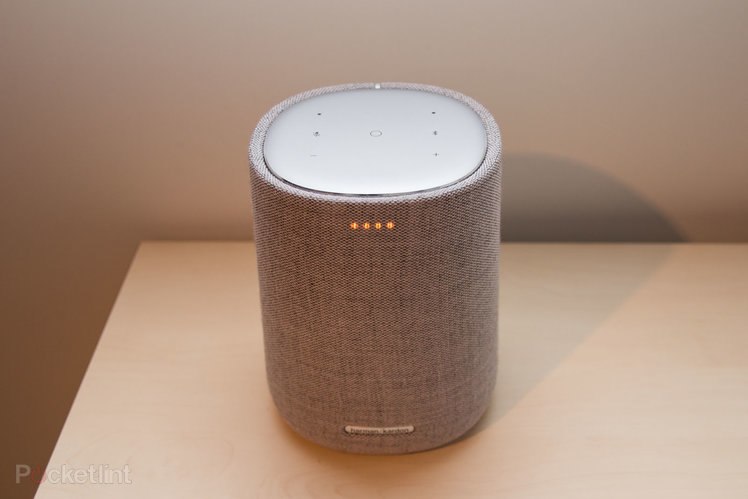 Harman Kardon's Citation series got an early reveal with the announcement that the Citation 500 had won an EISA award, but at IFA 2018, the Samsung-owned company has revealed a full line-up of Citation speakers, a complete family of connected audio devices.

While some manufacturers are dabbling in smart speakers with one, perhaps two, models, Citation swings in with an entire suite, all loaded with Google Assistant, so you can build a smart speaker installation in your home.

The series starts with the One (£180), and it's more than just a coincidence that it shares a name with Sonos' smart speaker. It sits in the same space, a voice-controlled connected speaker, with similar dimensions. We've listened to it and it sounds great – a serious competitor in the smart speaker space, an alternative to Google Home.

The 300 and 500 both have a colour LCD on the top, to give information, while the One and 100 offer touch controls. All have Google Assistant lights on the front, so you can see when Google has heard and is working.

Taking it further, there are wireless satellite speakers (£400) for the rear channels – with stands – so you can easily make the system a 5.1 setup. There's no Dolby Atmos, if you want that you'll have to look at Samsung's soundbar instead.

The Citation Bar, however, has 3x HDMI connections, meaning you can connect a range of devices though it, so it's fully equipped to be the heart of your home entertainment system. We've listened to it briefing in a demo and it sounds pretty strong.

As if that wasn't enough, there are also Tower speakers. These are much more substantial showpiece speakers which work as a pair, to really deliver your music. They look great, they sound great, but they're statement speakers with a statement speaker price at £2200 for the pair.

We have to admit though, we do like the Tower speakers. There aren't many big, stereo, speakers with voice control and these really do sound great.

The Citation speakers all come with built-in Google Assistant and support Chromecast, Bluetooth, and Wi-Fi. They can all be connected into a multi-room arrangement, letting you play the same music across your Citation speakers, or different music in different rooms.

We've seen plenty of speaker families like this in the past – LG Music Flow for example – but the thing that really stands-out with Citation is the big commitment to Google Assistant. These will be great speakers for anyone building a smart home, giving you voice control not only of your music playback, but of your connected smart devices too.

We also love the design. Finish in Kvadrat fabric, they have a contemporary look that avoids the hard plastics often found in speakers, so they'll remain blissfully fingerprint free.

The Harman Kardon Citation speakers will all be available to pre-order from October, in either a light "Winter Gray" or dark "Classic Black" finish. It's a range that rivals the diversity (and prices) of Sonos, but will it sound as good? We'll let you know as soon as we can get them to test.